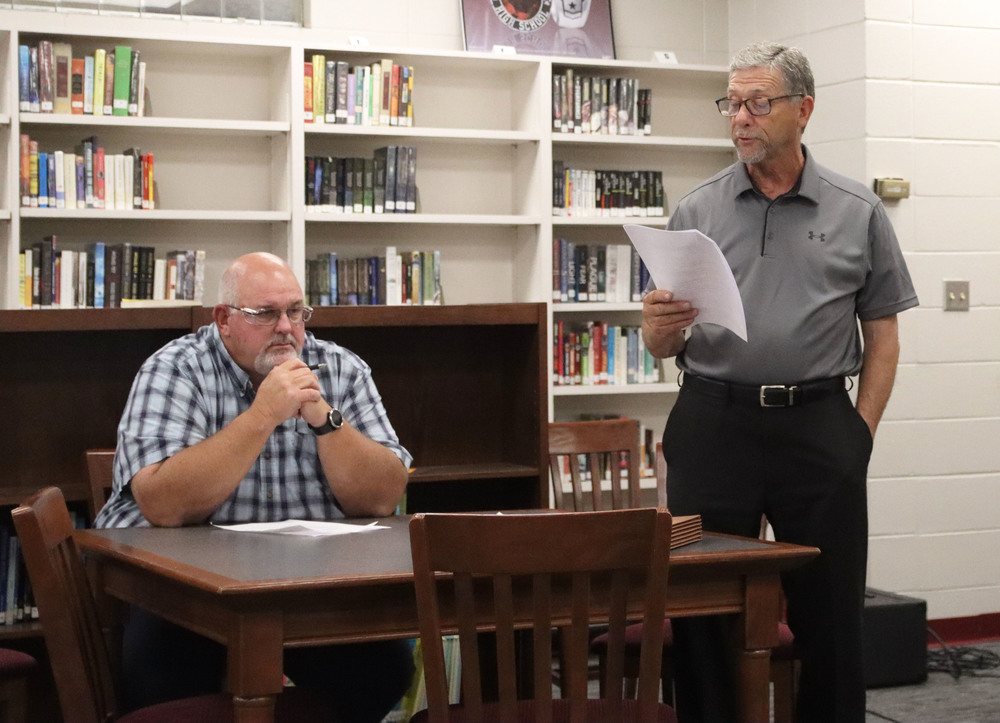 The football field house at D.F. Anderson Field was named Aug. 23 in honor of late Thomasville High School Tigers football coach W.L. “Bill” McNair. The proclamation was approved by the Thomasville City Board of Education at their monthly meeting in the THS library.

Daryl Drinkard and Ken Nichols of the Thomasville Quarterback Club attended the board meeting, and Drinkard read the proclamation honoring McNair.
McNair served as head football coach at THS from 1981 to 1992. The team’s record during that period was 102 wins and 36 losses. The Tigers won 11 area championships out of 12 years. In his first year as head coach, THS went undefeated during the regular season.
His 1988 team won the Class 4A state title with a record of 14-1. McNair was also named “Coach of the Year” for the 1988 season.
Twenty-four of the football players on THS teams during McNair’s tenure received All-State recognition.
McNair passed away on May 10, 2022. The Quarterback Club will honor Coach McNair and his family at the Homecoming football game on Sept. 30.
In other action from the board meeting, Anjelica Gibson, Chief School Financial Officer, reported that accounts payable for June 2022 totaled $277,836.58, and payroll totaled $894,396.67. Accounts payable for July 2022 totaled $469,307.26, and payroll totaled $955,505.19.
• Emily Thornton, Child Nutrition Program director, gave a presentation on having the school system change to the Community Eligibility Provision (CEP) program. It would be a year-to-year program in which breakfast and lunch would be available for free to all students.
The Thomasville City Schools District would be eligible for CEP because of the 49.67 percent poverty rate of all students combined, she said.
The program would eliminate the need for parents to enroll in the free and reduced food program.
The board has until Sept. 30 to consider changing to CEP. Board member will consider Thornton’s proposal at the Sept. 13 meeting.
• A renewal of the school board’s liability coverage with Risk Management was approved. The annual renewal amount is $534, effective Oct. 1, 2022, through Sept. 30, 2023.
• The board approved the school Superintendent and the Chief School Financial Officer being added to the school system Visa account and serve as business officers.
• The school system Foster Care Plan, LEA Consolidation Plan, and the EL District Plan for the 2022-2023 school year were approved.
• The supplements salary schedule for 2022-2023 was approved.
• A special called meeting of the school board will be held at 5 p.m. on Tuesday, Sept. 6 in the THS library. That meeting will include the first hearing for the Fiscal Year 2023 budget.
In addition, the board will meet at 5 p.m. on Tuesday, Sept. 13 in the THS library. The meeting will include the second hearing on the FY 2023 budget. There will also be a 4 p.m. work session.